gives performances both as a soloist and a chamber musician. He has performed at numerous music festivals (such as the Warsaw Autumn, Gstaad Menuhin Festival, Carinthischer Sommer, Allegro Vivo, Kwartesencja, Forum Gitarre Wien, the Wrocław Guitar Festival). As a soloist he has worked with the orchestras: National Philharmonic Orchestra, Vratislavia Chamber Orchestra in Wrocław, Concerto Avenna, Capella Bydgostiensis, Camerata Nova, Fresco Sonare, Sinfonietta Cracovia and the Chopin Academia Orchestra. He has also performed together with the National Philharmonic Chamber Musicians, the Royal String Quartet and the Wiener Instrumentalsolisten band, and as a member of New Tango Bridge and New Art Ensemble. He is the co-founder and a member of an international guitar quartet Guitar4mation, specialising in performances of 20th and 21st century music, including a repertoire combining contemporary music and jazz. Since 2015 he has been a member of Hirundo Maris, a group founded by Arianna Savall and Petter Udland Johansen (CD productions: “Il Viaggio d’Amore۔, “The Wind Rose”).

Michał Nagy also performs duets with Marcin Siatkowski, a guitarist, Robert Kabara, a violinist, an oboist Arkadiusz Krupa, accordionist and bandoneonist Klaudiusz Baran. The artist has made some solo recordings for Polish Radio and Television. He is the author of many guitar arrangements, both solo and with chamber orchestras, and also works as an editor for Polskie Wydawnictwo Muzyczne. He collaborates with Juliusz Słowacki Theatre in Krakow on theatre music and has recorded music for the following record companies: Sony Music (the 2002 Fryderyk Award for the Piazzolla Tango record), Dux (nominated for the 2000 Fryderyk Award for Micro piezas), Polskie Nagrania Edition, Carpe Diem Records and Gramola Vienna.

He is a laureate of international guitar competitions in Fiuggi, Gdańsk, Kraków and Tychy. He has been the holder of the Fundacja Kultury scholarship twice. He is the laureate of the Malopolska Region Ars Quaerendi 2010 award for outstanding actions for promotion and popularization of culture. He has been a teacher at the Academy of Music in Krakow since 1997, since 2006 as a Doctor of Art. Since 2008 he has been the artistic director of Terra Artis Festival in Lanckorona, in the vicinity of Kraków. 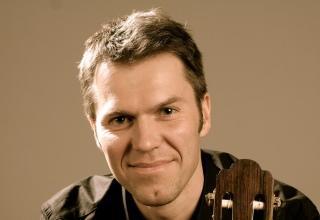